*I received Spoken via the Author in exchange for my honest review. All opinions are my own.*

High school freshman Roman Santi has everything — good looks, great friends, a mansion with an infinity swimming pool — except the one thing he really wants. A relationship with his father.

When Roman’s life gets turned upside down, (thanks, Mom!?), he is forced to leave his pampered Hollywood lifestyle and move into his grandparents’ Midwestern home. Sleeping on a lumpy pullout sofa and starting at a new high school is the worst, but Roman’s life starts to look up when his pink-haired friend, Zuzu, and his crush, a classmate named Claire, introduce him to performance poetry through the high school’s Spoken Word Club. While his mom is flying back and forth to L.A., trying to return them to the life they had, Roman becomes part of a diverse group of characters who challenge his rather privileged view of the world. Through Spoken Word, Roman recognizes the hole in his own life he needs to fill and discovers his voice. Spoken Word leads Roman on a journey of new friendships, first love, and finding the dad he never knew.

“Spoken” is an uplifting, funny, and heartfelt coming-of-age story that captures how the honesty of performance poetry binds together students from all different walks of life and forever changes Roman’s life.

I found Spoken to be a little difficult to get into, but once I was in I was hooked. The story is very easy to relate to, especially for me, as I have been through similar things myself. Not the LA or the moving across the country parts, which are comical by the way, but the broken home aspects.

The main character, who is quite angsty if I do say so myself, was able to find himself through poetry. After moving across the country due to his mothers infidelity, he finds himself uprooted and unsure of who is or who he can even be in this new environment. Poetry, and the Spoken Word Club at his high school, connected him to friends, his father who he did not know, and his family.

I would have liked/would like to seem more on his connecting with his father. I was a tad disappointing that that was such a huge end goal for this novel and then was underwhelming when it happened.

I was really quite touched by the novel, and I do want to thank the author for reaching out to be. I am pleased to say I have given this novel five stars and this completely unbiased, from the heart, review.

If you are looking for a nice, heart filling read, check out Spoken Word by Melanie Weiss. 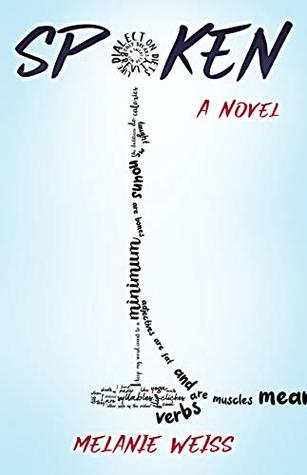 I write about books. View all posts by Tiffany